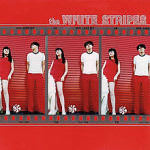 The band releases its self-titled debut album on the Sympathy for the Record Industry label. To promote the album, the band tours with Pavement and Sleater-Kinney. Jack White says:

There’s definitely a childishness in it. From Meg’s standpoint, the drumming is real primitive and I really love that. My voice, I think, sometimes sounds like a little kid. You see that approach in a lot of great bands — Iggy Pop throwing tantrums on stage. Everybody’s still that same person they were when they were young — at least they still want to be. They still want to have that freedom.