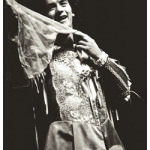 Hanks wins the Cleveland Critics Circle Award for Best Actor for his performance as Proteus in Shakespeare’s The Two Gentlemen of Verona. The award was his first major accomplishment as an actor.

There are not a lot of people who are willing to throw all their things in a car and drive across the country to Cleveland for no money, but I had nothing to lose. I had nothing to keep me anywhere. I thought the whole point of being 18 or 19 years old was to throw your stuff in the back of the car and go somewhere.