One dead in Eastern Nebraska 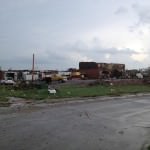 Twin Tornadoes sweep Eastern Nebraska. One person is reported dead while 16 others were critically wounded from the tornadoes. At least one of the tornadoes hit the town of Pilger, a community of about 350 people 75 miles northwest of Omaha, the National Weather Service reported. A member of the Stanton County Commission says:

More than half of the town is gone — absolutely gone. The co-op is gone, the grains bins are gone, and it looks like almost every house in town has some damage. It’s a complete mess.