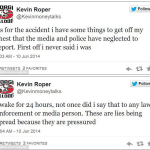 Claiming he is being targeted as a scapegoat because celebrities were involved, driver Kevin Roper sends out tweets of protest over the charges brought against him. Roper sent at least four tweets from his Twitter account, expressing his sorrow over the deaths and injuries, but claiming total lack of blame for the accident.  Roper states he was not drunk, high, or sleep deprived at the time of the crash.