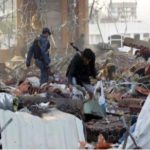 A military coalition air strike led by Saudi Arabia hits a mourning party gathered in Sanaa, Yemen, killing 82 civilians and injuring 534. The attack is one of a series of attacks to support Yemen President Hadi against the armed religio-political rebel groups Houthis. The Houthis administration condemns the attack. However, Saudi air forces deny any such attack happened.

Yemen
Add your comments below...