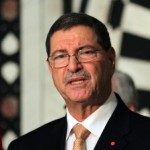 Prime Minister Essid, responds to the recent terrorist attack by announcing additional security measures and asking the people of Tunisia to work together to get through the crisis. According to the Prime Minister, crucial security upgrades that must be put into place immediately include:

examining the funding of organisations suspected of promoting radicalism, closing about 80 renegade mosques outside government control and declaring certain mountainous zones military areas and calling up army reservists…The fight against terrorism is a national responsibility. We are at war against terrorism which represents a serious danger to national unity during this delicate period that the nation is going through.