What's this? This is an unbiased just-the-facts news summary about Amanda Seyfried, extracted from the original article by Newslines' contributors. To see the newsline of each topic, click the links below. Learn more 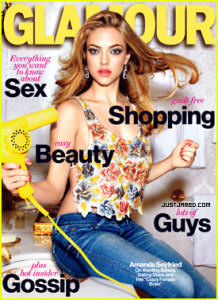 Seyfried appears on the cover of the March 2012 issue of Glamour magazine. She talks about whether she loves Dominic Cooper, having kids, and feeling competitive with other actresses.

Yeah, sometimes. But the funny thing is, the girls that I’m always up against for roles are pretty nice and cool, like Emma Watson. She’s awesome. She’s really funny and smart. And Carey Mulligan. It’s flattering to be up against her because she’s really good, and she’s cool too…I think the era of the diva actress is coming to an end.