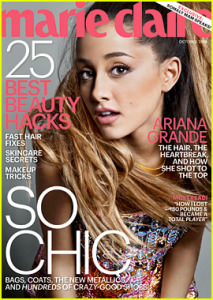 Grande appears on the cover of the October 2014 issue of Marie Claire magazine. She talks about early ambitions, hiding behind her Nickelodeon character, and her first single not doing well.

I was like, ‘Guys, there has to be a really distinct difference between me and my character.’ And we did that with ‘The Way.’ I dyed my hair back to brown. I made out with a rapper in the video. I made the point I wanted to make. And I was excited to do so after so many years of pretending to be somebody else in front of a lot of people.