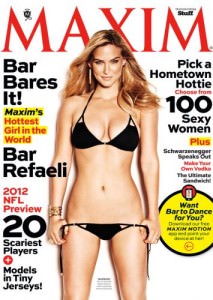 Refaeli appears on the cover of the September 2012 issue of Maxim magazine. She is number 1 on Maxim’s Hot 100 list of 2012. She talks about her body and men’s underwear.

I just prefer for a guy to be comfortable. A lot of American guys like boxers. In Israel they prefer tight, short underwear, and in Brazil they wear really little bikinis. I think it’s a matter of where you come from.