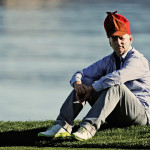 Murray gives an interview to The Talks. He discusses playing hard to get, pressure on set, and foreign producers.

We’ve had crazy guys on our movies and we had an interesting bunch of producers. We had these Polish guys that came: “The Polish guys are coming.” What is that? The Polish guys come and they’re like happy-go-lucky Polish guys and then the German guys came along and here come the German guys. One of the Polish guys says to me (speaks in Polish accent) “Hey when movie come, you come to Poland?” Yeah, okay. We went to Poland for the cinematographer’s film festival up there and it was a total blast! It was much cooler than Cannes.