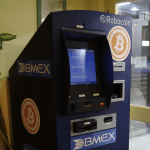 TechinAsia reports Tokyo’s first fully operational Bitcoin ATM opens in The Pink Cow, a restaurant and bar in the middle of Roppongi that’s popular with ex-pats, artists and musicians. The restaurant was the first restaurant in Japan to accept Bitcoin and hosts meetups for Bitcoin fans. The ATM had been used 75 times since it was unveiled. Traci Consoli, the American owner says:

If someone isn’t the guinea pig, the first to do it and say it works, then it will take twice as long to get the ball rolling in Japan. Japan has been slow and skeptical. There was definitely a drop-off after Mt. Gox, so the new people must have gotten scared. But still, 50 people showed up at the Bitcoin meetup we hosted a month after it crashed