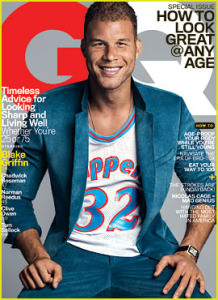 Griffin appears on the cover of the October 2014 issue of GQ magazine. He talks about Donald Sterling’s racist tape, dating, and religious tolerance.

I hate when I see Christians, or whatever religion it is, protesting gays and having signs that say, like, ‘God hates gays.’ How could He be mad at somebody for liking the same sex? I don’t get it. And it also makes me mad, because as a religious person, it makes you look bad.