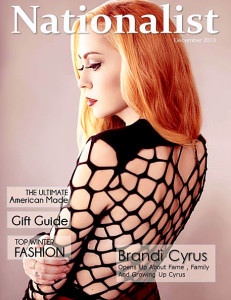 Cyrus appears on the cover of the December 2013 issue of Nationalist. She talks about her sister Miley Cyrus and defends what she does.

She is SO true to herself and 100 percent authentic. Which is a rare trait to find in people in general, but especially in the entertainment industry where everyone is held to such unrealistic standards and trying to make an impression and be perceived a certain way.