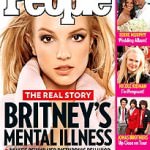 Spears appears on the cover of People after she refused to hand her children over to their dad for visitation. Spears locked herself inside her home to prevent her children being taken. Any ambulance was called and Spears was transported to the hospital for a possibly bipolar disorder. Source:

The images of her from the ambulance startled everyone who knows her. She looked manic. Her family is terrified. Everyone has been worried for some time. Her world has been crumbling around her.