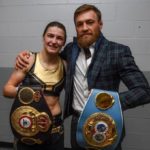 McGregor was ringside in Boston to watch compatriot Taylor successfully defend her world titles. He then visits Taylor in her dressing room where he praises the WBA and IBF champion.

It is an honour to see you live. Big respect Katie, honestly. You were enjoying it; hand behind your back. But they should have given you a microphone [after you won]. You are a special talent.

McGregor has an impromptu sparring session with Quavo in a Dublin recording studio.

After O’Connell gave a big shout out to McGregor on The Late Late Show, the two meet, by chance, the following night, at the BAMMA 35 event in Dublin’s Three Arena.

Waiting a long time to meet the main man @TheNotoriousMMA! What a privilege to eventually meet and chat with the worlds best. pic.twitter.com/nJumWqpNlT

McGregor releases a photo with Berlusconi, and praises the family as the ‘Italian empire’.

McGregor, along with his attorneys and manager, meets Bennett and Mantell of the Nevada State Athletic Commission in Las Vegas, to ask for a rehearing of punishment order for  throwing a water bottle at UFC 202. McGregor has said that the punishment — a $75,000 fine, an anti-bullying public service announcement with a production value of $75,000, and 50 hours of community service — was too stiff. Chairman Bennett says he agrees with McGregor’s position and says the punishment should be reduced to $25,000 fine plus 25 hours of community service. The commission will hear McGregor’s request when it reconvenes on March 22. Once a settlement has been agreed, McGregor can reapply for a boxing license. Bennett:

I think it’s important that the public knows that the chairman, upon speaking with Conor, realized a wrong was done and he’d like to make it right. We don’t always get it right. We’ve made mistakes in the past. The chairman lives by example.

McGregor posts a selfie with the Weeknd.

McGregor posts a photo with Drake.

This is what being the youngest and the greatest at the same time looks like! It was an honour to watch this man perform last night! @champagnepapi much love and respect my brother, you are an ANIMAL! Thank you for the hospitality! #TheRevengeTour

McGregor posts a picture of himself with Bono.

McGregor posts a photo with Lopez, wishing her a happy birthday.

Happy birthday Miss Jennifer Lopez!
What a woman! What a night! @jlo pic.twitter.com/WooxtubzK2

Timberlake posts a picture with McGregor.

Just hanging with The Notorious at #UFC200

NBD… Just hanging with The Notorious at #UFC200

McGregor and Rihanna meet at her Dublin show.

A meeting between White and Diaz in Stockton, CA, ends with Diaz walking out angrily. Sources say the meeting, which started friendly, was to discuss terms for Diaz vs. McGregor, and that Diaz left because he was not happy with the financial arrangement. White:

Obviously I’m not going to disclose details of the deal, but let’s just say my trip to Stockton didn’t go well.

McGregor and White meet at the Montage hotel in Beverly Hills. McGregor arrives in a Rolls-Royce Phantom drophead coupe and is personally greeted by White. The two men hug, and then have a two-hour private dinner.

White: Welcome to the UFC. There’s been a lot of hype. I guess the hype is real. Marcus Brimage was a tough dude.
McGregor: Yeah man, he’s tough. I hit him in a few shots.
While: You hurt him a lot before you finished him.
…
White: People are going crazy on Twitter. And I’m sorry they were f-cking with your flag. What the f-ck are they doing fighting with the kid’s flag?