What's this? This is an unbiased just-the-facts news summary about Amal Clooney (Alamuddin), Donald Trump, extracted from the original article by Newslines' contributors. To see the newsline of each topic, click the links below. Learn more 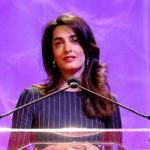 At a Texas women’s’ conference, Clooney talks about president-elect Trump.

We have to hope for the best. The president-elect has said that fighting ISIS is actually a priority … so it may be that there can be progress, and obviously everyone has to respect the outcome of the democratic process here, and we have to hope for the best. [However, Trump’s comments] that there should be a religious test imposed on entering the U.S. or the fact that there should be state-sponsored torture or that families of suspected terrorists should all be killed — all of those things are violations of international human rights law and the values that underlie that…I think there’s some concern from abroad as to are these things actually going to happen, or is the U.S. going to lose some of the moral standing that it has internationally.

She also talks about women’s rights:

The worst thing that we can do as women is not stand up for each other, and this is something we can practice every day, no matter where we are and what we do — women sticking up for other women, choosing to protect and celebrate each other instead of competing or criticizing one another.