What's this? This is an unbiased just-the-facts news summary about Elisabeth Moss, extracted from the original article by Newslines' contributors. To see the newsline of each topic, click the links below. Learn more 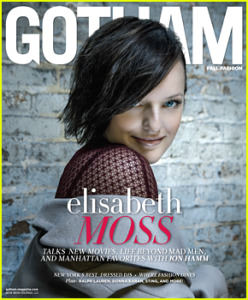 Moss appears on the cover of the Fall 2014 issue of Gotham magazine. She talks about who she wants to work with, what makes her happy, and New York City.

I love going to the theater. I can’t get over that feel­ing when you’re walking down a street in the 40s, with rows of theaters on either side. It’s 7:30 pm and you’re going to see a play, and so many people are also going to go see plays, which I think is so cool. There’s an excitement and there’s buzz. It brings me back to when I’ve done Broadway and makes me wish I were backstage in my dressing room getting ready. You can go to beautiful places, neighborhoods, and parks in many different states and countries, but there’s noth­ing like the theater district for me.