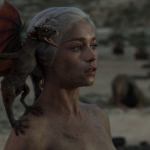 Clarke appears as Daenerys Targaryen in Fire and Blood, the tenth episode of the first season, alongside Jason Momoa as Khal Drogo and Iain Glen as Ser Jorah Mormont. Daenerys awakes from unconsciousness and is told by Ser Jorah that her and Drogo’s son, Rhaego, is deformed and stillborn. Drogo is alive, but in a vegetative state, and the khalasar has moved on without them. Daenerys chooses to end Drogo’s life rather than let him linger. She has a funeral pyre built to burn Drogo’s body and the healer woman who betrayed him. She then walks into the flames herself and is apparently consumed. The next morning, it is revealed that she has survived, and the dragon eggs she placed in the flames have hatched.