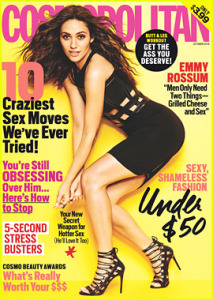 Rossum appears on the cover of the October 2014 issue of Cosmopolitan magazine. She talks about people’s confusion with her Shameless character, texting guys, and whether she’d get married again.

I hope I do. Honestly, I was so young, I don’t think I knew what marriage meant. My parents were never married, and I was teased in school and called a bastard. So the idea of marriage as safety forever was idealized in my head, and we rushed into it.