Take This To Your Grave 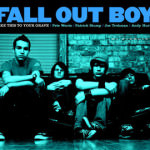 Take This To Your Grave is released by Fueled by Ramen to positive reviews. The band swiftly gained popularity as crowds during their shows would end in riots as several fans would end up on stage. The band got large amounts of recognition from larger companies such as Alternative Press and Hot Topic, along with appearances on major summer tours like South by Southwest (SXSW) and Van’s Warped Tour. Before the release, the band was adamant to not have the album leaked or previewed because they believed it had more potential than the time frame in which they recorded it allowed. Alternative Press calls the record:

A sub-cultural touchstone […] a magical, transcendent a deceptively smart pop-punk masterpiece that ushered in a vibrant scene resurgence with a potent combination of charisma, new media marketing and hardcore punk urgency