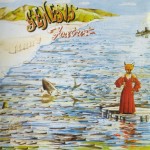 The band release their fourth studio album, Foxtrot, with the same lineup as Nursery Cryme. The album includes Watcher of The Skies, Get ‘Em Out By Friday, TimeTable, Horizons and the 23-minute long Supper’s Ready, the band’s longest track. Gabriel sings all songs except Horizons, which is an instrumental piece for guitar, written and performed by Hackett. The album is produced by the band with Dave Hitchcock as co-producer, and John Burns as engineer. The sleeve is once again designed by Anthony Whitehead.