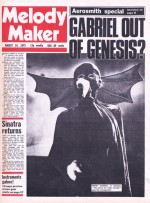 The Melody Maker reports that Gabriel has left the band. Collins:

We were not stunned by Pete’s departure, because we had known about it for quite a while. We are going to carry on and we’ve been rehearsing for three weeks for the new album. It was Peter’s decision and I can only emphasise that we are carrying on as if nothing happened.