Bush shows up for jury duty at the George Allen Courts Building in Dallas, TX. He spends around three hours at the court chatting with other attendees. Juror:

They made it seem like it was an anonymous juror that never showed up and then they brought him in.

Bush is not selected, not due to his high-profile but because the other jurors were selected before him. Judge Moye:

It would be great if everyone took their jury service the same way [Bush] did. He understood it was important, he took it in good nature and he was engaged and talked to the lawyers. One of the remarks I made to jury was all of you have some reason why you have to do something else. But take a look over and see you have the former president who has given his time to be here, so think how good your excuses for getting out of here really are.

Perry poses in an instagram of her between President Clinton and President Bush, and jokes that she might even be next.

I want to share a little about my life, because apparently there’s a little confusion that all family members are supposed to be clones of one another

On budgeting and controlling spending, Jeb:

I think that, in Washington during my brother’s time, Republicans spent too much money. I think he could have used the veto power. He didn’t have line-item veto power, but he could have brought budget discipline to Washington, D.C.

On the Patriot Act:

There is not a shred of evidence that anybody’s civil liberties have been violated by it. t’s already been proven constitutional, and there is ample evidence that it has protected us

The New York Times reports that American and American-trained Iraqi troops repeatedly encountered chemical weapons from Saddam Hussein’s rule, and were wounded by them on at least six occasions, between 2004 and 2011. Troops secretly reported finding close to 5,000 chemical warheads, shells or aviation bombs, it says. The report is based on interviews with soldiers and officials, as well as redacted intelligence documents (available here.) It says the finds were kept secret from the public and not circulated widely within the military, and some soldiers who were wounded had their injuries covered up, even to the extent of being denied treatment. Most of the areas where weapons were encountered are reportedly now under ISIS control. A large fraction of the weapons were not in serviceable condition, and did not disperse the chemical agents over more than a limited area when they were ruptured. But some of the weapons can still be serviceable in IEDs. Former Army sergeant on hand for the destruction of mustard shells:

I love it when I hear, ‘Oh there weren’t any chemical weapons in Iraq.’ There were plenty. 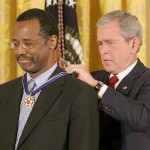 Carson is awarded the Presidential Medal of Freedom by President Bush at the White House. The medal is the country’s highest award for civilians. Carson:

I am humbled by President Bush’s recognition of my work. I am extremely grateful that he chose to honor me not only for my work as a neurosurgeon, but also for my efforts to improve the lives of America’s youth. I am blessed to have the opportunity to pursue both paths, which I consider equally important.

Dr. Carson is selected to work with the President’s Council on Bioethics. He is one of seventeen physicians, ethicists, lawyers, scientist and theologians tackling a variety of bioethics matters and advising the president on these issues especially when they conflict. Carson:

I thank President Bush for the honor of an invitation to serve on this important council. As discovery and technology move science and medicine rapidly forward, I look forward to participating in meaningful dialogues on the ethics of applying this new knowledge to care for humankind.

After a hard political battle, President Bush signs an omnibus bill which includes $110 million in initial funding for NASA’s New Horizons mission to Pluto and the Kuiper Belt System. The funding allows the team to proceed with the final design of the probe.

It’s like the old days. We are going to the frontier. We’re going back to the roots of the space program.

What's this? This is an unbiased just-the-facts news timeline ('newsline') about George W. Bush, created by Newslines contributors. Make it grow it by finding and summarising news. Learn more