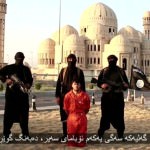 ISIS releases a video apparently showing the beheading of a Kurdish fighter, as a warning to Kurds. Titled ‘A Message In Blood,’ it begins by showing what appear to be a group of 15 Kurdish peshmerga fighters captured in Iraq. The men are sitting and standing in front of an ISIS flag inside a small room with makeshift walls and blue mats lining the floor. An earlier shot shows the captured men still in uniform and peshmerga fighter Hassan Mohammed Hashin reads a prepared statement to Kurdish leaders:

You have made a huge mistake by joining hands with America.

The footage then cuts to a sandy roadside. The Great Mosque of Mosul is visible in the background as three armed, black-clad militants stand behind a kneeling captive. A fighter delivers a speech:

In the name of God, peace be upon him. I have two messages: the first one is for the dog of Roman, the jerk Obama, how did you send your nation and soldiers again to Iraq, did you forget the thousands of dead Americans who you gave them as a sacrifice for wars? Did you forget thousands of images of corpses, deformed and those people who still suffer? Did the economy of America recovered from its crises to get into a new one? But the second message is for the servant of the Jewish Mas’od, this is the destiny of one of the militants, and others who you sent to Muslims unless you finish your work with the Jewish and your alliance with the Crusaders.

The militant then unsheathes a knife from his belt, tilts the capitve’s head back, and begins to decapitate him. The video shows only a brief shot of the execution. It ends with ISIS fighters parading in APCs in Mosul, brandishing flags and weapons.