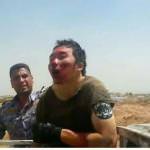 The Iraqi military says it has captured an ISIS militant from China. If confirmed, this would be the first time a Chinese national is known to have fought for the group, also known as Islamic State. Chinese foreign ministry spokesman Qin Gang, responding to a foreign reporter’s question in Beijing:

It remains unclear whether the man is of Uighur origin, a Muslim minority group in China’s Xinjiang province.