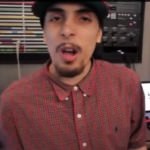 Former rapper Abdel-Majed Abdel Bary is believed to be under investigation for the beheading of Global Post journalist James Foley. Previously known as L Jinny or Lyrical Jinn in a music  career that saw his grime tunes played on BBC Radio One in 2012, Bary is believed to have traveled to Syria in 2013 from Maida Vale, west London. His whereabouts in Syria are not known, and his @ItsLJinny Twitter account has been deactivated. Earlier in 2014, he posted a picture of himself online holding a severed head with the caption:

Chillin’ with my homie or what’s left of him