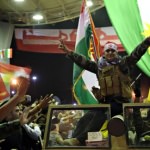 The force is equipped with heavy guns including mortars, canons, rocket launchers, etc… This force will not engage in frontline combat but will have a support role.

He says the Kurdish fighters in the city say they have enough troops but need weapons and ammunition. More peshmerga fighters could be sent if needed.