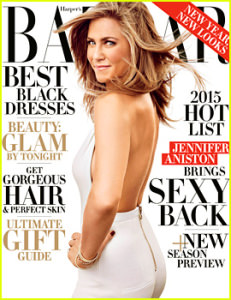 Aniston appears on the cover of the December 2014/January 2015 issue of Harper’s Bazaar magazine. She talks about her fiancé, her 40’s, and not holding grudges.

[I’m] a forgiving person.I absolutely am. I think it’s extremely important to forgive. Otherwise it just builds up like toxic waste. There’s nothing worse than holding a grudge. Listen, people can do unforgivable things, but you have to let it go and say, ‘Look, we’re all human beings. We make mistakes.’ To hold any kind of resentment is like taking rat poison and waiting for the rat to die.