We’re targeting $2 million to $5 million checks, but wanted to be small enough to also be able to work with a bigger platform firm if it’s a $10 million round — and there are a lot more of those now than there used to be. We’ll also devote around 20% of the fund to seed deals with the intention of then leading the A round.

Gouw and Fonstad talk about diversity and their fund on CNBC with Boorstin. Fonstand:

Fundamentally we think diversity as a thesis is a very important part of any success in business. Whether that’s in a board room, in a venture firm or in a management team. But we think of diversity much more than just gender, though gender often becomes a litmus test for that. We certainly think that because we come at it from a different perspective that has given us a very wide scope from which to look at opportunities and to invite opportunities in. We’re collaborative in nature, we’re not trying to use sharp elbows and trying to knock out angel investment groups.

The two are optimistic that the recent media attention on Ellen Pao’s case will drive more change. Gouw:

As part of a CNET special report exploring what people and companies are doing to make the tech industry more diverse, Fonstad says:

Both Theresia and I got to the point in our careers where we decided to focus on the early stage startup again so we can be more collaborative and company-building. We help them as they grow — getting the management team hired, and helping them get early customers and follow-on financing for the next stage of growth. It’s why we both became VCs…I’m noticing an industry shift in general. There’s been a significant inflow of newly wealthy women who are investing for themselves, becoming angels or forming microfunds with less than $4 million. It’s just more gratifying to work for themselves.

In an interview about the influence of the Ellen Pao case, Gouw talks about the impact of what she describes as the ‘unconscious bias’ in Silicon Valley.

We’ve all had those little inequities, those death by a thousand cuts. The person who won’t speak to you and addresses all of their questions and comments to your male colleagues in the room, or being asked to take notes or fetch coffee…The fastest way to make cultural change,” Gouw said, “Is when you see something that is not being met in the marketplace is to go out there and start your own firm.

Fonstad says the Pao suit has opened up an important dialogue in the tech world.

Gouw and Fonstad talk to Chang and Johnson on Bloomberg West about how Aspect Ventures looks to help start companies for the long-term and where they see growth. Gouw:

This is our entrepreneurial thing. It’s like when entrepreneurs see a vision and you are both called to something. And we think this is a great time to be focused on seed and early-stage investing around mobility as a theme, through the stack, from enterprise to consumer. And to work with someone you know for two decades.

Fonstand talks with Falk Marques Group at the Women’s Private Equity Summit about Aspect Ventures, the emerging mobile market, and the importance of women entrepreneurs to the VC industry.

The certainly has been a relatively low number of women in the venture industry. Traditionally around 10-11% are professionals and 4-5% are partners. We see in the entrepreneurial ranks — particularly with the advent of social media and consumer focus over the last couple of years — that there’s been a swelling in the number of women entrepreneurs that have come forward. We think that in the venture industry there’s the opportunity to be a tipping point and Aspect Ventures and Theresia and I have an opportunity to be both thought leaders around diversity, but also in terms of role modeling in working closely with companies to help them understand the importance of different perspectives around the table and how that ultimately leads to better outcomes.

Wired profiles Gouw and Fonstad. Gow describes how, when working as Accel, she felt excluded from certain networking opportunities because she was a woman, and she would use a secret code on her calendar to conceal when she was going to a women’s networking event. That changed when Sheryl Sandberg’s book Lean In came out, and word spread that the Facebook COO had been conducting all-female salons at her house. Accel’s partners started asking Gouw to target specific women when she attended female networking events. She says her participation in women’s gatherings was now seen as an asset, and she stopped using secret codes on her calendar.

Fonstad tells the story of an all-male engineering team she knew that was developing a hardware prototype. When they showed it to a newly hired female engineer they saw that her longer nails rendered it impossible to use, and the team ended up completely redoing the user interface. Gouw:

Gouw and Fonstad’s launch of Aspect Ventures is featured in Time. Gouw:

There’s tons of data showing that diversity on boards, both public and private, and in management teams, leads to better financial returns. It helps to have a board room where people are looking at the same complicated problems from different angles. There is a growing understanding among entrepreneurs and executives that there are real customer and product advantages to having a more diverse group of people on your management team and in your board room. If you’re a consumer-facing service, half of your audience is going to be male and half of your audience is going to be female…We are venture capitalists. We are in the business of making money for our investors and our entrepreneurs. Diversity makes a difference for business and the bottom line. 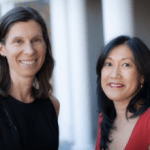 Gouw and Fonstad start Aspect Ventures, a venture capital fund focusing on the “emerging mobile marketplace.” Gouw and Fonstad have together created $10 billion in public market value, helped lead 15 M&A transactions and over 300 rounds in follow-on capital raised for their portfolio companies. The founders have pooled enough of their own money to back companies for the next couple of years. Aspect will make around a dozen investments per year, ranging from $500,000 to $2 million in seed and Series A funding. The firm will lead investments but also co-invest. Gouw:

We’ve launched Aspect to meet the need in the market for a new kind of firm that can provide investment and advice to entrepreneurs over the long arc of their companies’ growth. From the start, Aspect Ventures is built to partner and collaborate – with entrepreneurs and also other players in the startup world from angels to multi-stage venture capital firms.

Through our diverse perspectives and experience, we work to add value to our companies from Day One, as active advisors, board members, and partners throughout the roller-coaster ride of building important and successful companies.

Gouw and Fonstad talk about starting Aspect, being women in the boardroom, and investing in mobile start-ups. Fonstad:

Jen and I have both lived through two major boom and bust cycles, from Internet 1.0 to the age of mobility and I think that we have not yet seen a slowdown in technology innovation or in the growth of the early-stage companies. So I actually think it’s a great time to be investing in startups.

What's this? This is an unbiased just-the-facts news timeline ('newsline') about Jennifer Fonstad, created by Newslines contributors. Make it grow it by finding and summarising news. Learn more