Lawrence reprises her role as Katniss Everdeen in this sequel directed by Francis Lawrence. Katniss Everdeen and Peeta Mellark win the 74th Hunger Games and become symbols for revolution, so winners of the previous Hunger Games are assembled for the 75th Hunger Games, known as the Quarter Quell, to bring them back into the ring. Co-starring Philip Seymour Hoffman, Josh Hutcherson, Liam Hemsworth, and Donald Sutherland.

After The Hunger Games, Katniss has moved into a house, she’s a Victor now, and she’s trying to get her life back together. She’s suffering from Post-Traumatic Stress and her life is very different now because she goes home to the people who she knows and they don’t really know her any more. There’s a certain side of her that really only Peeta knows at the point, and she’s always felt there’s a side of her that Gayle only really knows because of her history, and now her life is so different and she’s just trying to piece it together before she finds out she has to go back.

Lawrence plays Katniss Everdeen, in the futuristic, dystopian film, The Hunger Games. In order to save her sister’s life, Lawrence’s character volunteers to participate in the deadly televised, Hunger Games.

Lawrence plays Raven (a.k.a. Mystique) in the film, X-Men: First Class. Along with other mutants, she is charged with the task of preventing World War III:

There was no CG for me. It’s the same technology and the same methods they were using on Rebecca Romijn, the original Mystique ten years ago. I know everybody feels sorry for me, but we’re having so much fun. It’s like a sleepover, except I’m naked and being painted.

In the dark comedy, The Beaver, Lawrence plays Norah. The film is about a depressed man who is kicked out by his wife and only communicating with people through a beaver puppet. Lawrence’s character is a street artist whose brother has passed away.

I’ve watched her do two characters that are different, but they both have Jen in them, which is dignified. Even if they’re broken, they’re never weak.

Lawrence stars in the film Winter’s Bone as Ree, a girl trying to hunt down her father and keep her family together. The role was very important to Lawrence:

I’d have walked on hot coals to get the part. I thought it was the best female role I’d read – ever. I was so impressed by Ree’s tenacity and that she didn’t take no for an answer. For the audition, I had to fly on the redeye to New York and be as ugly as possible. I didn’t wash my hair for a week, I had no makeup on. I looked beat up in there. I think I had icicles hanging from my eyebrows. Lawrence stars in the film, The Poker House as a girl named Agnes. She plays the daughter of a prostitute and tries desperately to lead a normal life herself while being pushed away by her mother for reasons that she doesn’t understand. Lawrence plays Tiff in the film, Garden Party. She is the friend of the main character, April, who turns to Tiff for help when she is facing the threat of homelessness. 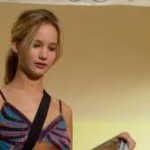 Lawrence appears in the film, Not Another High School Show as a ‘frantic girl.’ The film is a parody of popular teen dramas like, Beverly Hills 90210, Dawson’s Creek, and Laguna Beach.

Lawrence plays Lauren Pearson on the television show, The Bill Engvall Show. Lauren is the daughter of Bill Pearson, a therapist and has two younger brothers. She appears in 31 episodes.

Lawrence plays Abby Bradford, in an episode of the television show, Cold Case entitled, A Dollar, a Dream. Her character is the daughter of a woman who’s body was found in a lake. 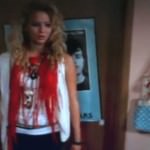 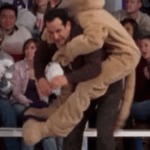 Lawrence plays the mascot in an episode of Monk entitled, Mr. Monk and the Big Game.

It was really exciting, but it is also tied to the most humiliating thing in my entire life… Everybody watched it after I told them that I’m going to have this great huge part, and I was just the Mascot. Lawrence plays Caitlin in the TV movie pilot, Company Town. She plays the daughter of a government agent, living in a neighborhood with many other government agents and their families. The film is unreleased.