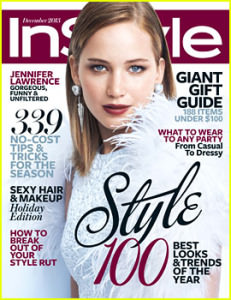 Lawrence appears on the cover of the December 2013 issue of In Style magazine. She talks about accepting the role of Katniss, exercising, and life after The Hunger Games.

It did kind of scare of me when I first was offered the part. The more somebody recognizes me, the less I’m going to be able to lose myself in any other characters. But then I started to think differently. It’s not as scary when it’s a character you love, who is impressive and honorable.