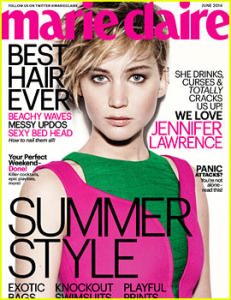 Lawrence appears on the cover of the June 2014 issue of Marie Claire magazine. She talks about maintaining her relationship, rumors that she’s jealous of Kristen Stewart, and tripping on the red carpet.

I’m trying to do the right thing, waving to fans, trying to be nice, and there’s a traffic cone. The second I hit it, I was laughing, but on the inside I was like, ‘You’re f*cked. They’re totally going to think this is an act…’But trust me if I was going to plan it, I would have done it at the Golden Globes or the SAGs. I would have never done it at two Oscars in a row. I watch Homeland – I’m craftier than that!