What's this? This is an unbiased just-the-facts news summary about Jensen Ackles, extracted from the original article by Newslines' contributors. To see the newsline of each topic, click the links below. Learn more 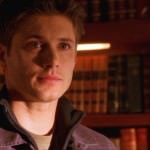 Ackles plays Jason Teague on the television show, Smallville. The show is about a teenage Clark Kent and his struggles with harnessing his powers and using them for good. Ackles’ character has his own problems which include his mother plotting to kill his girlfriend and using him to get close to her. The first episode that Ackles appears on is entitled, Crusade.