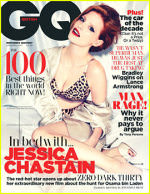 Chastain appears on the cover of the January 2013 issue of British GQ magazine. She talks about working with Brad Pitt, her film Zero Dark Thirty, and being a redhead.

You Brits are usually so mean to your redheads. Why is that? In America it’s seen as a good thing. Look at Julia Roberts – she’s cool, right? I was working in Thailand and I’d be walking down the street and people – British people – would stop the car and scream, ‘ginger!’ at me.