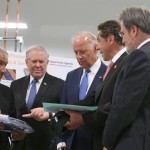 Biden and Cuomo announce a photonics initiative in Rochester, that will hire about 100 scientists and other experts and get to work on a handful of research projects within about five months. The $600 million initiative includes $110 million in federal funding, $250 million from New York state, and the rest from private companies. Supporters say the project could mean thousands of jobs for the region as it brings together government, industry and academia to advance photonics research and its use commercially.

You’ve gone from making Brownie cameras to lenses that are now mapping the far side of Pluto…AIM Photonics is going to act as a central hub and will give Rochester photonics businesses the space and the capacity they need to generate the next generation breakthroughs and secure American leadership in the manufacturing of integrated photonics.

A Walter Reed spokesperson says that the eldest son of vice president Biden was hospitalized at a military hospital because it was secure enough to allow regular visits from his father. She will not say whether he remains there, contending that releasing any information would violate his privacy.

[The hospital] often admits individuals as a matter of security precaution. The vice president and Dr. (Jill) Biden’s regular visits to see their son necessitate his treatment in a facility that is more secure than a traditional hospital.

It remains unclear when Biden was admitted.

At a Center for American Progress event Biden says that he’s proud that he’s spent his career focused on the middle class.

In this town, being referred to as ‘Middle Class Joe’ is meant as an insult. No, I really mean it. Because you’re not sophisticated if you’re middle class. Because even among some of we Democrats, we’re sophisticated jerks lots of times.

He stands by the straightforward comments that have gotten him into trouble:

We should run on what we’ve done. Whoever’s running should also talk about what the resurgence in place in the future is, and talk about in 2016 what we’ve done. Some say this amounts to a third term for President Obama. I call it sticking to what works and expanding on it to restore the middle class.

On the International Day Against Homophobia and Transphobia Biden promotes equality for homosexuals. He says progress in America:

remains incomplete, but the momentum has shifted in the right direction.

He equates “religious condemnation” of homosexuality with “violence with impunity, mistreatment by police, the denial of health care … and social isolation.”

Progress has also been made in many places around the world. But in too many places, life for lesbian, gay, bisexual, and transgender individuals is actually getting worse. In too many places, LGBT community members face violence with impunity, mistreatment by police, the denial of health care, or religious condemnation and social isolation.

Biden says the U.S. is grieving the deaths of Foley and Sotloff and will bring ISIS to justice:

He says America will not be intimidated by brutal acts like the beheading by ISIS of the two journalists:

We came back after 9/11. We dusted ourselves off and we made sure that Osama bin Laden would never, ever again threaten the American people. We came back after Boston strong, blaming no one but resolving to be certain that this didn’t happen again. As a nation, we’re united, and when people harm Americans, we don’t retreat. We don’t forget.

What's this? This is an unbiased just-the-facts news timeline ('newsline') about Joe Biden, created by Newslines' contributors. Help us grow it by finding and summarising news. Learn more