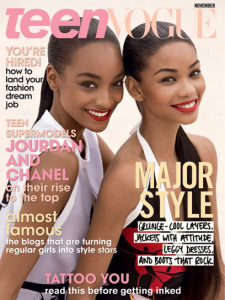 Iman and Dunn appear on the cover of the November 2009 issue of Teen Vogue magazine. They talk about the modelling world, racism, and their friendship. Iman says:

I could sit here and tell you, ‘I love Jourdan! We’ve always been the best of friends! But we haven’t. Until recently, we barely even spoke. We went from being superclose in the beginning to dead silence if we saw each other backstage at a show. If we did say hi, it was hi, and that’s it.