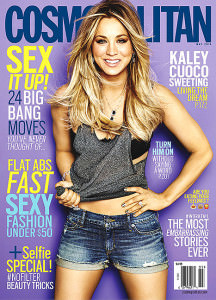 The actress appears on the cover of the May 2014 issue of Cosmopolitan. She talks about her breakup and the problems it had.

It took a minute, a bit of awkwardness. By the grace of God, we became best buddies and moved on in such an elegant way. [He’s] one of my closest friends.

Kaley Cuoco
Add your comments below...