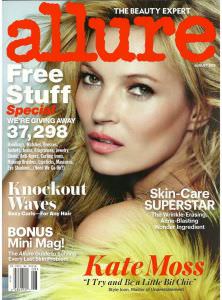 Moss appears on the cover of the August 2013 issue of Allure magazine. She talks about being aware during photo shoots and posing nude.

I used to be so scared about ‘Oh, I don’t want to show my body.’ Now that I’ve shown it, it doesn’t bug me about my moles, or ‘This isn’t big enough’ and ‘That’s not smooth enough.’