What's this? This is an unbiased just-the-facts news summary about Kathy Griffin, Michigan Avenue Magazine, extracted from the original article by Newslines' contributors. To see the newsline of each topic, click the links below. Learn more 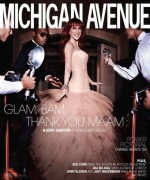 Griffin appears on the cover of the December 2009/January 2010 issue of Michigan Avenue magazine. She talks about A-listers.

When I look at someone like Megan Fox, I think, OK, have at it, honey. Enjoy it. But what you have does go away. I’m all about the old-school people that just have really learned a lot, survived a lot. To me, the real A-lister is going to be at that table in 20 years, 30 years. It’s probably not the Maxim Hot 100 Girl of this year. It’s Jerry Springer, who could buy and sell the Hancock building. I’m telling you, there’s a secret society of people who are richer than anybody on the Forbes list.