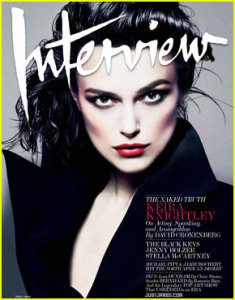 Knightley appears on the cover of the April 2012 issue of Interview magazine. She talks about choosing roles and working with Steve Carrell in Seeking a Friend for the End of the World.

He has this amazing ability to be incredibly funny but have that pathos at the same time – sort of that crying-clown thing. The movie itself has comic moments, but it’s about the end of the world, so obviously it has an apocalyptic feel to it that’s not that comic, because everybody dies … Other than that, though, it’s hilarious.