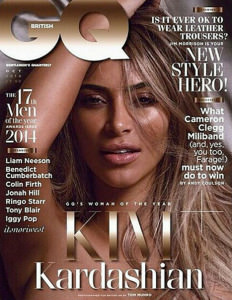 Kardashian appears on the cover of the October 2014 issue of British GQ magazine. She talks about whether there is a sex tape of her and Kanye West and naming her daughter North West.

Kanye and I were having lunch … and Pharrell came over to us and said, ‘Oh my God, are you guys really going to call your daughter “North”? That is the best name.’ Then a little while later Anna Wintour came over and asked the same thing. She told us: ‘North is a genius name.’ Kanye and I looked at one another and just laughed. I guess at that point it sort of stuck.