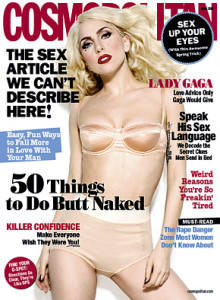 Gaga appears on the cover of the April 2010 issue of Cosmopolitan. She talks about an old boyfriend who didn’t believe in her.

I had a boyfriend who told me I’d never succeed, never be nominated for a Grammy, never have a hit song, and that he hoped I’d fail. I said to him, ‘Someday, when we’re not together, you won’t be able to order a cup of coffee at the f***ing deli without hearing or seeing me.’