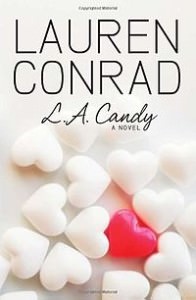 Conrad releases first novel titled L.A. Candy. The book is the first installment in a trilogy that follows Jane Roberts who moves to Hollywood and gets cast in her own reality show. The book becomes a New York Times Best Seller.

I didn’t take anything specifically that happened to me. The only thing that I did was … it was a way to show not necessarily me but just the other side of being on a show like ours. For everyone that’s done it I think you see one side and you don’t see the other. It’s kind of an interesting story to tell.