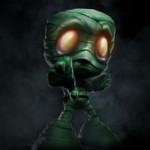 The Sad Mummy is released in the June 26, 2009 patch. His abilities include Crushed Touch, Bandage Toss, Despair, Tantrum and Curse of The Sad Mummy. Designer:

To everyone in Valoran / so he wouldn’t be ignored / Amumu sent an invitation / — an Urf Day party right next door.

So glad he’s born / The manatee / Of spatula-slapping fame. / Amumu wrote of the birth of Urf /and asked if they’d all play a game.

At last, the morning of the party / Urf Day was finally here. / Out the window, Amumu looked / but not a single friend appeared.

So young Amumu took tiny steps /and traveled through the land. / But even when Amumu stood /and peeked into their home / He saw they partied without him /And he was still alone…