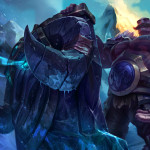 The Heart of the Freljord is released in patch version 4.7 along with the Dragonslayer Braum skin. Designer:

As with all champions, we designed Braum to fill a specific gap in the League of Legends champion pool. Specifically, he’s the first true tank support that we’ve created, a champion who takes the hits for their team. We’ve had plenty of defensive supports – champions like Nami, Soraka, Janna etc – who negate damage through heals or shields, along with fighter supports like Leona and Alistar, who are generally great at initiating teamfights before diving deep into the enemy team and disrupting as much as possible. Braum’s something different: he’s a tanky support who literally takes the hits for his team, and as such requires a new mindset, position and playstyle to most conventional supports.