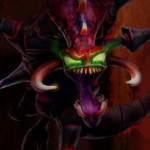 The Terror of the Void is released. His ablities include Carnivore, Rupture, Feral Scream, Vorpal Spikes and Feast, where he attempts to eat an enemy whole. Designer:

There is a place between dimensions, between worlds. To some it is known as the Outside, to others it is the Unknown. To most, however, it is called the Void. Cho’gath is a creature born of the Void, a thing whose true nature is so horrific most will not speak its name. Its fellows have been poking at the dimensional walls for a crack, a way into Runeterra, where they can visit their own personal paradise of horror upon the world. A way in they have found, as something dark stirs in Icathia, perverting the summoning ritual – how Cho’gath came to be here. Fortunately, the power of the summoning has chained Cho’gath to the League of Legends, where it uses its Voidborn abilities to help decide the fate of the world. It knows what it would choose, if given half the chance.