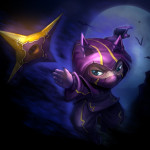 The Heart of the Tempest is released in the patch version 1.0.0.82 along with the Swamp Master and Deadly Kennen skins. Abilities include Mark of the Storm, Thundering Shuriken, Electrical Surge, Lightning Rush ans Slicing Maelstrom, which summons an electrical storm that casts down lightning bolts multiple times a second. Designer:

While we’ve all seen what Shen can do out there on the battlefield, it bears mentioning that Ninjas come in all shapes and sizes. Allow me to introduce you all to Kennen, the Heart of the Tempest. Unlike Shen, Kennen originally hails from Bandle City, home of the yordles, and this fleet-footed, pint-sized ninja terror is every bit as lethal as his compatriot. Let it never be said that the Kinkou Order is closed minded with regard to their choice of students!

But what’s the flip side to having two equally lethal ninja champions? Well, it’s a well known fact that ninjas work alone! That’s right, ninjas have a tendency to step on each other’s toes, yordle or otherwise. So while you might be tempted to deploy as many flippin’ ninjas as you can get your hands on, use caution!