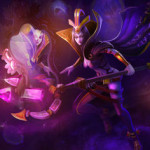 The Deceiver is released in the patch version 1.0.0.104 along with the Prestigious and Wicked LeBlanc skins. Her abilities include Mirror Image, Sigil of Silence, Distortion, Etheral Chains, and Mimic, which casts a precious spell and deal significantly increases damage. Designer:

If you’ve been looking to add a little bit of high society to your League of Legends lineup, this next patch is the one you’ve been waiting for. Allow me to introduce the talented and graceful Emilia LeBlanc, a stately sorceress ready to round out your champion selection. In addition to being extremely attractive, the Deceiver comes primed to fuel your most megalomaniacal of desires. If you’ve got a bit of mischievous thread to your personality, you’re definitely going to want to make sure to pick up LeBlanc in the upcoming patch. Would I lie?