What's this? This is an unbiased just-the-facts news summary about Kevin Durant, LeBron James, NBA, extracted from the original article by Newslines' contributors. To see the newsline of each topic, click the links below. Learn more 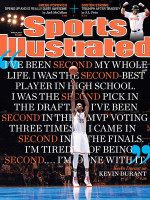 In an issue of Sports Illustrated, Durant expresses his frustration at playing in James’ shadow:

Durant says he uses his frustration as a means to self-improvement:

I don’t watch a lot of other basketball away from the gym. But I do look at LeBron’s box score. I want to see how many points, rebounds and assists he had, and how he shot from the field. If he had 30 points, nine rebounds and eight assists, I can tell you exactly how he did it, what type of shots he made and who he passed to.

People see two young black basketball players at the top of their game and think we should clash. They want the conflict. They want the hate. They forget Bird cried for Magic. A friend was getting on me about this recently, and I said, ‘Calm down. I’m not taking it easy on him. Don’t you know I’m trying to destroy the guy every time I go on the court?’