What's this? This is an unbiased just-the-facts news summary about Libya, extracted from the original article by Newslines' contributors. To see the newsline of each topic, click the links below. Learn more 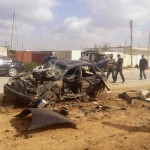 A suicide bomber drives a vehicle filled with explosives into a unit of Libyan soldiers in central Benghazi. Three are killed and 11 are wounded, some critically. The bomber targeted a unit of soldiers engaged in a street battle near the city’s port and naval base. This is an area where pro-government forces and bands of militarized Islamists frequently clash. Military source:

Suicide bombings have become frequent in the eastern port city, where forces loyal to the country’s internationally recognized government have been clashing with Islamist fighters, part of chaos gripping the oil producer.